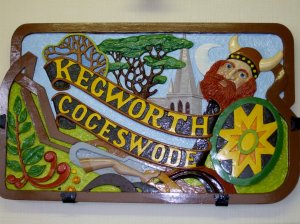 To celebrate Her Majesty Queen Elizabeth II's Silver Jubilee, the Parish Council decided that it would run a competition to design a Kegworth Village Sign, the winning design from which would be produced and erected in the centre of the village. It also decided that the sign would be paid for by public donations and not by the Parish Council via its Precept. In this way the people of Kegworth would feel that they actually "owned" the sign and it would become symbolic to the village and could be used as the logo for Kegworth Parish Council.

Children and adults alike took part in the competition. Schools involved their pupils and the general public got involved too. On the 8th January, 1979, Mr. Ray Weston of Garendon School, Loughborough, was awarded the prize of £10 for having had his design chosen as the one that the Parish Council would take forward to have made into the Kegworth Village Sign.

The Parish Council collected donations from throughout the village and the sign was commissioned as follows:
The wood, Iroko, was purchased at a cost of £34.12
The preparation and lamination cost £3.00
Carving, by Mr. Marvin John Elliott, cost £220.00
Painting by Mrs. Jenny Ashmore cost £100.00

Mr. Marvin John Elliott was a very experienced artist who specialised in wood carving and he was based in premises on Bondgate in Castle Donington. It took Mr. Elliott 150 hours to carve the sign in accordance with Mr. Weston's design. Mrs. Jenny Ashmore worked at Derby Playhouse and was an expert in scenery decoration. The Parish Council had to purchase specialist acrylic paint to protect the wood and for the paint's longevity.

The sign was completed and collected, but no home could be found for it. Extensive searches of buildings, talks with property owners and areas within the village investigated to house the sign, but none could be found. Owners were not forthcoming to offer their buildings upon which the sign could sit for fear of vandalism and there was no-where in the centre of the village where the sign could "stand freely". The sign was taken by Cllr. John Pike and Mrs Lesley Pendleton, Chairman and Clerk of Kegworth Parish Council, in 1983 to France along with a coach load of local representatives for the Twinning Charter Ceremony.

Finally, Cllr. Ian Westhead, who was also the Headmaster of Kegworth Primary School, suggested that a "housing" be built at the front of the school, but behind the school railings, in which the sign could sit and be seen by the public but be protected at the same time. A housing was erected by H. Hammond & Sons Ltd. of Loughborough at a cost of circa £700 and the sign sat happily in its housing until the Parish Council acquired its office at 1 London Road, Kegworth. The sign was moved into that office in 1997, which is where it can now been seen by the public but is protected from the elements. Iroko is extremely heavy and a special metal housing had to be made so that the sign could be erected on the rear wall of the main room of the office. This housing was made by Mr. Peter Wheildon of Hemington, who is a Blacksmith. Anyone wishing to see the sign may do so by visiting the Parish Council's Office.