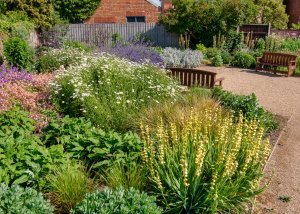 At the meeting held on Monday 2nd July, the Parish Council agreed the "Friends of SideLey Park Constitution".

The Friends of SideLey Park was formed in 2018 following the completion of the construction works undertaken by a representative working group of the Parish Council.

The working party agreed that its primary role had been completed and that the Park should be returned to the care of the community.

If anyone is interested in becoming a 'friend of' SideLey Park, please contact Vicky Roe, Parish Clerk here.

A huge Thank You to Jan, our garden designer, and to all the kind volunteers who have helped to keep SideLey Park looking lovely over the past year. It is wonderful to have this facility within the Village where people of all ages can benefit from a peaceful retreat.

A lovely comment from a resident of Kegworth Village sums it up: "Just to say what a joy it was to discover the lovely SideLey Park over the weekend... Such a well kept, colourful and well thought out design. Well done to all those involved in the upkeep of the Park."

2019 weeding dates for SideLey Park are:

The above dates could be affected by unscheduled events, holidays or weather.

The weeding days start at 9am down at SideLey Park and will be led by our garden designer, Jan Barrowcliffe. Please wear appropriate clothing and bring gloves and your own small tools. All help is greatly appreciated. Thank you.

How the new planting scheme began...

Thursday 12th October 2017 saw nearly 20 Friends of SideLey Park pull together to transform the Sensory area into a feast of texture and colour. The 'hard labour' will be well rewarded in the Spring when the plants and bulbs are well established.

The Copse area was planted on Thursday 26th October 2017 and volunteers came along to help once again. The Women's Institute joined the volunteers and witnessed an Acer tree, which they had sponsored in celebration of their 90th anniversary, being planted.

Community weeding will take place at the end of November for one day and then begin again in early Spring 2018, so watch out for dates. If you would find it easier to do weeding in your own time for an hour or two every so often, then please get in touch.

Works so far on your SideLey Park

Hopefully, many of you will already have seen the improvements to the Park including the new paths, dog agility area and seating and more recently, the installation of a new piece of play equipment from Wicksteed called 'Pick Up Sticks 8'. The equipment is intended to cater for older children as well as adventurous adults!

New signage is in place to explain dog behaviour on the Park with the dog agility area being designated a 'Green Zone' meaning dogs are welcome off lead. The rest of the Park is within the 'Yellow Zone' where dogs should be kept on lead. There are of course 'Red Zones' such as the MUGA and children's play area where no dogs are allowed.

Volunteers have already spent a number of hours planting the borders at the welcome and performance areas as well as the sensory area. All of these borders will need maintaining in the future. Our garden designer has said she will need some help for a day at the end of November. The weeding and upkeep will then take place monthly from early Spring 2018. If you would like to get involved either on the days we will advertise or in your own time, please let me know. Many hands make light work!

The Parish Council really hopes that you and your family enjoy the enhancements to Sideley Park. If you have any comments or suggestions, please do not hesitate to contact me here. 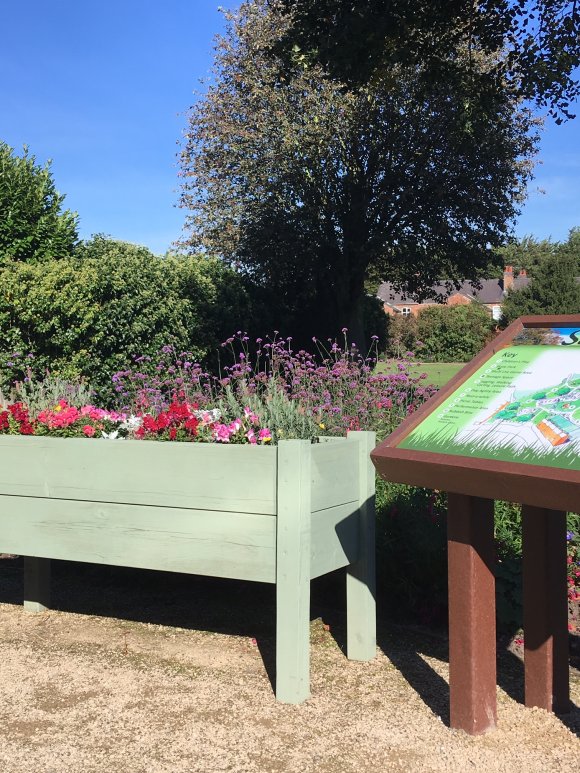 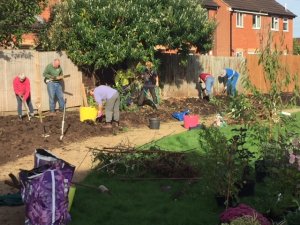 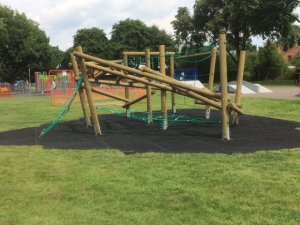 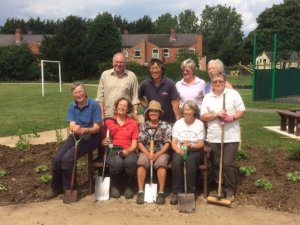 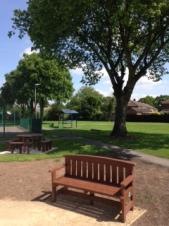 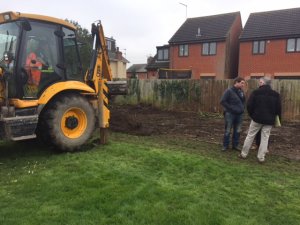 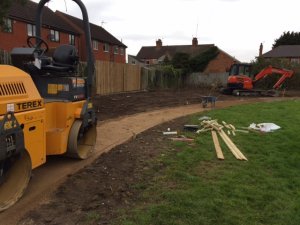 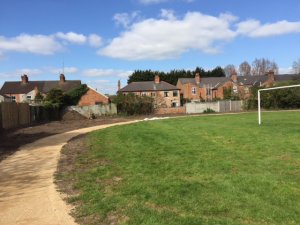 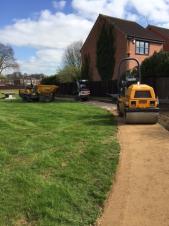 The Parish Council and the working party have held many meetings over the past months to work towards the improvements to Sideley Park having of course listened to all the feedback received from the consultation carried out in late 2016.

A Project Manager was appointed and the first 'spade' went in the ground on Monday 3rd April 2017 which works lasted for around 30 days. These were very exciting times and it was possible to see a difference even just after a few days and we could begin to visualise how the completed Park would look!

The multi-use leisure path was the biggest part of the whole project and the pathway was laid during the month of April. The contractor worked in zones for safety reasons.

Next to be installed was a dog agility area, some picnic benches, memorial seating and garden areas were dug over. Everyone worked hard to ensure the majority of the park was complete ready for the Family Fun Day and Food Festival held on Saturday 3rd June 2017.

After the 3rd June and before the summer break, we installed some new equipment aimed at older children which we hope will be well received!

Other smaller projects are still being considered such as goal nets for the football posts, a possible BBQ area and the opportunity for residents to purchase memorials such as bird boxes, sculptures and the like.

If you wish to speak to me about the project, then please get in touch here.